VR Painting Spawns A “New Profession” in the Metaverse

VR painting is one of the latest ways users create fully immerse experiences using the VR hardware and software iQIYI makes assessable. Many art hobbyists who have picked up their “brushes” in the VR world are excited by the challenge of painting virtually. Artists remarked that in comparison to traditional, two-dimensional painting, VR painting requires even stronger spatial thinking as the “canvas” is now three-dimensional. However, the process creates artworks that immersive and realistic.

Featuring artists virtually rebuilding the once-damaged ocean ecosystem, the video released on the World Ocean Day exemplifies a compelling story told through VR painting. The video inspires viewers to join force in marine protection as it shows the rebirth of coral reefs and seaweeds in an absorbing fashion. 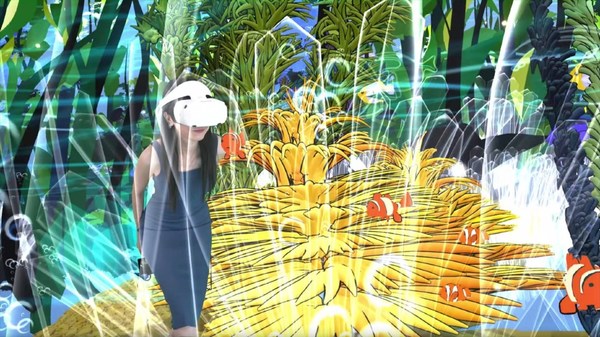 Painting using VR also offers a new level of creative freedom for long-time artists. Newer artists revel in the challenge of painting virtually, noting that the interactive nature of VR painting makes it an exciting creative and social experience. Early this year, QIYU VR launched a VR painting game “Elephant World”, which inspired many users to share their creations in the QIYU VR community. In March 2022, iQIYI Smart also hosted a Metaverse Artist Competition for children, and the event was well received among young artists.

For many, the potential unlocked by VR painting may even lead to new future career directions. While most VR artists now paint for fun, VR painting can potentially be adopted to do clothing and architectural design. For young people, VR painting stands as a promising career possibility.

Growing a Robust VR Ecosystem with Hardware and Content

iQIYI entered the VR market in 2016, with its investment over the years spanning content production, platform building, and hardware development. In 2017, iQIYI launched iQIYI QIYU (Adventure) VR, the first all-in-one VR product on the market in China equipped with a 4K screen. In 2021, the company introduced two flagship VR products in the span of three months. With 30 built-in free games, QIYU 3 entered the market in September and made an instant splash with its many revolutionary features, including a specially designed dual-screen solution and the iQUT future cinema. In December 2021, the company launched QIYU Dream, which, despite its cutting-edge features, was at a more affordable price point compared to market alternatives. The first batch of QIYU Dream sold out two days after the device’s official release on e-commerce channels.

Among the first long-form video companies in China to invest in the VR software and hardware ecology, iQIYI is now an established VR manufacturer in China. According to International Data Corporation (IDC), a premier global provider of market intelligence, in Q4 2021, QIYU’s omnichannel sales in China increased by 475.9% year-on-year, consolidating a 22.5% overall market share. In 2021, iQIYI QIYU accounted for 27.4% of the overall VR products sold via digital channels in China.

A Future of Possibilities

Statista, an online statistics database, estimated that the size of the global VR / AR market may exceed $12.1 billion in 2024, with the compound growth rate from 2021 to 2024 potentially going beyond 36%. Looking ahead, iQIYI is committed to further cementing its leadership position in the market through making VR hardware even more accessible, while growing an innovative VR content ecology featuring arts, dramas, films, variety shows, and games.