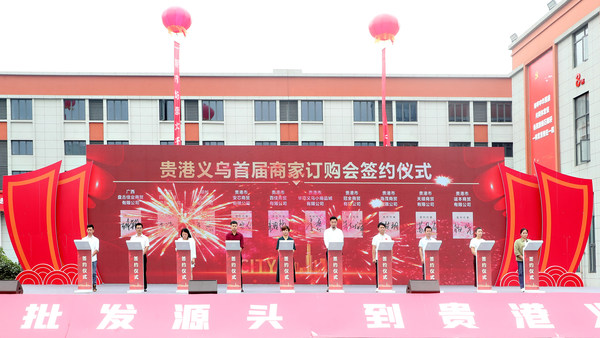 With a total investment of 11 billion yuan, the industrial park covers an area of 2,388 mu (159.2 hectares) and a planned construction area of 3 million square meters, according to Yang Yang, deputy general manager of Zhejiang China Commodities City Group Co., Ltd. The park is expected to offer 40,000 direct job positions, with its average annual transaction volume predicted at about 13 billion yuan, and annual profit and tax about 400 million yuan, Yang noted.

Connecting with members of the Association of Southeast Asian Nations (ASEAN) by both land and sea, Guangxi is eyeing unprecedented development opportunities in terms of cross-border logistics. The launch of the park will infuse the city of Guigang with a strong impetus to grow into a “capital of small commodities” in south China, said Su Jian, deputy director of the Guangxi regional commerce department, noting that the industrial park will strive to serve the broadened ASEAN market under the Regional Comprehensive Economic Partnership (RCEP).

Data shows that the sales of small commodities to ASEAN countries has increased significantly after the RCEP came into effect. It is expected that the Guigang-based industrial park will be inspired by Yiwu’s development experience to further improve its trade and service capabilities, and promote more products with Guigang feature to the world, according to Yan Jiuqiu, director of Guigang Municipal People’s Congress Standing Committee.

Huawei Mobile Services’ Apps UP 2022 Returns to Asia Pacific with a Total of US$200,000 Cash Prizes to be Won

Exhibition on Multinationals and China kicks off in Qingdao