Blood donors around the world give blood, raise awareness and attempt to save 150,000 lives.

SYDNEY, Aug. 29, 2022 /PRNewswire/ — Thousands of people from around the world have taken part in Global Blood Heroes Day in an attempt to break the world blood donation record and save 150,000 lives. 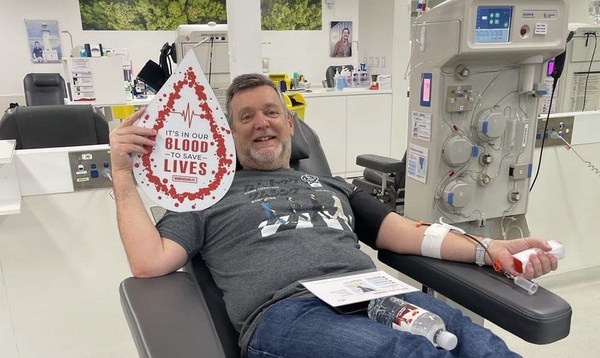 A Global Blood Hero donates at a blood centre in Sydney, NSW. (Credit: Who is Hussain)

Globally countries are struggling with a shortage of blood. To tackle this challenge, the #GlobalBloodHeroes campaign was initiated by Who is Hussain, a social justice charity. They have partnered  with major blood donor organisations around the world.

Australia was one of the first countries to kick off Global Blood Heroes day. Donations began in New Zealand and concluded in the U.S. It took in 250 locations, 20 countries across six continents. In Asia they include Philippines, Hong Kong, Singapore, India and Pakistan.

The world record will be confirmed by Official World Records, a leading verification body recognised by the Council of Notariats of the European Union. They will authenticate after  blood donor organisations confirm how many #GlobalBloodHeroes took part in their respective countries.

Ultimately, with so many taking part on Global Blood Heroes Day, lives have been saved. Just one blood donation can help save three lives.

Salli Ali, coordinator for Who is Hussain in Australia said: “We are thrilled by how enthusiastic fellow Australians have been about Global Blood Heroes day. We at Who is Hussain were inspired by the bravery and compassion of Hussain ibn Ali, the grandson of the Prophet Muhammad. And we’re pleased to see that compassion in full force on this amazing day. Giving blood donation is a universal act that unites people around the world.”

Cath Stone, Executive Director Donor Services at Lifeblood said: “We are excited to see Australians taking part in this ambitious worldwide effort. We need Global Blood Heroes to come forward and save lives. 33,000 blood and plasma donations are needed every single week in Australia just to meet patient demand.”

Has “K-Innovation” succeeded on the world stage? Startup Dot wins Best of Innovation award at CES 2023 for “Dot Pad”

Recapping 50 years of China-Japan relations: What the future holds