Shenzhen Daily: Projects worth ¥60b inked at Guangming investment conference 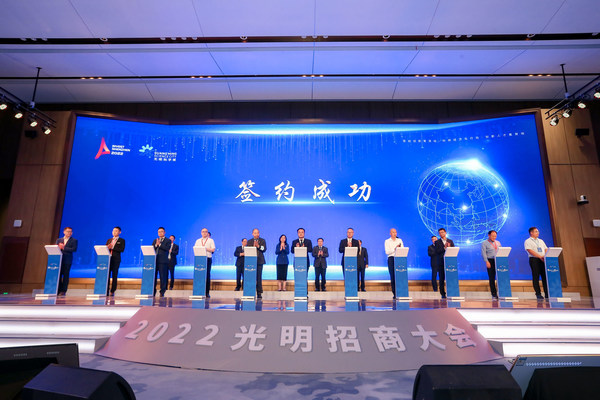 A scene at the Guangming Investment Promotion Conference.

Agreements for 40 projects with a total investment of over 60 billion yuan (US$8.944 billion) were signed at the 2022 Guangming Investment Promotion Conference held Wednesday at the Tian’an Yungu International Convention Center in Guangming District.

As a pilot zone for the comprehensive national science center of the Guangdong-Hong Kong-Macao Greater Bay Area (GBA), Guangming is committed to developing itself into a hub of innovation, a pioneer in science-powered economy, and a settlement for innovative talents.

“Guangming is now in a golden period for development and construction, which contains precious opportunities for investment and growth,” said Cai Ying, district mayor of Guangming, in a speech delivered at the conference. “We sincerely invite entrepreneurs from across the world to share with us the scientific dividends and join us to create a better future for Guangming.”

According to the conference, Guangming will provide 40,000 more public housing apartments and 68,800 more school seats for compulsory education by 2025.

“We choose Guangming because of the advantages that Guangming Science City offers in innovation, research and development, talent attraction, economic growth and industrial policies,” said Wang Yangxi, vice general manager of the company, adding that the excellent ecological environment of Guangming will also help the company attract more talents.

Hengmei Optoelectronics Co. Ltd. (HMO), an upstream enterprise of Guangming-based display maker TCL CSOT, will build a manufacturing base for polaroid, optical functional films and other products in a TCL CSOT industrial park. “An ultra-high-resolution display industrial cluster has taken shape in Guangming,” said Tan Zhimin, vice general manager of HMO. “The district also has an advantage in its industrial policies, which will help enterprises to reduce cost. We’re confident about our future development in Guangming.”

Jiang Su Honghui Energy Engineering Co. Ltd. is an engineering company that provide services to high-end industries, such as semiconductor, biomedicine and new energy. According to Liu Yunyan, executive general manager of the company, they have decided to invest in Guangming because the district is accelerating the construction of a pilot zone for the comprehensive national science center of the GBA, and also because Guangming is a young district. “Guangming has advantages in its educational resources, medical services and the number of high-end talents. The higher education institutions in the district, such as the Shenzhen Institute of Advanced Technology and Chinese Academy of Sciences, are also useful resources to help us improve our research ability,” said Liu.

This is a Shenzhen Daily report:

Blis launches new e-guide and interactive calculator, revealing that almost 50% of digital audiences are being missed