‘Nemo’s Aqua Pop’ is a mobile puzzle game based on the popular animated film ‘Finding Nemo’ by Disney and Pixar. The game features various characters from the original film and players will be able to enjoy fast and rhythmical puzzle play through reinforced special blocks composed of various block combination. Also, players will have fun seeing and collecting new fishes as they clear various missions. 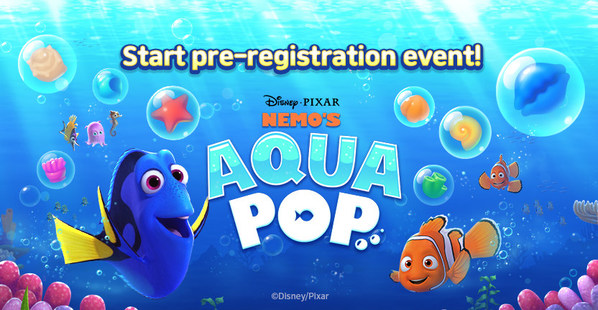 Users can pre-register by signing up on platform marketplaces such as Google Play Store and Apple App Store. Coins and other in-game special items such as linear jellyfish, bomb jellyfish, and unlimited hearts will be rewarded to pre-registered players at launch. In fact, rewards will become even greater with more participants – players may be rewarded with 5,000 additional coins if the game reaches 1 million pre-registrations. If the game surpasses 1 million pre-registrations, skills for characters such as Nemo, Dory, Bailey, Crush, and Destiny, and other gifts (such as five hours of unlimited hearts!) may be awarded.

Wemade Play Team Leader Hyeon-jin Shin stated, “This will be a game that can satisfy both animation fans and puzzle game users based on our expertise in developing and servicing various puzzle games.”

Wemade Play is planning to officially launch ‘Nemo’s Aqua Pop’ in Asia at the end of August after a month of pre-registration event.