In recent years, East China’s Jiangxi province has ramped up efforts to build a better business environment for enterprises, and has been offering up broad development space for investors.

Official data indicates that as of the end of June this year, the number of market entities in Jiangxi was more than 4.29 million, a year-on-year increase of 27.73 percent. The satisfaction rate of Jiangxi’s business environment ranked 11th nationwide, up seven places from the previous year, according to a report released by the All China Federation of Industry and Commerce last year. 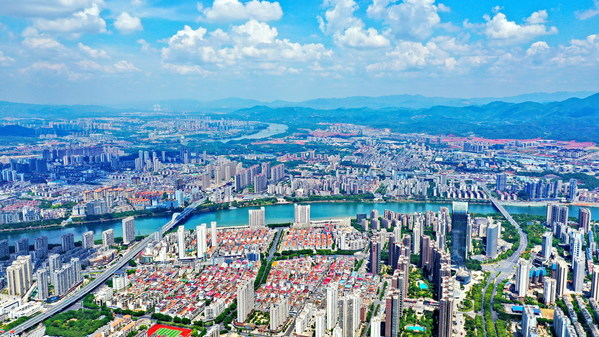 Ganzhou city in Jiangxi is now poised to be a major gateway between Jiangxi province and the Guangdong-Hong Kong-Macao Greater Bay Area. Ganzhou has rolled out a slew of innovative measures to create a sound business environment, which has injected new vitality into regional economic development.

“We have taken action to deepen reforms that make it easier for people to start a business. Efforts have also been made to promote one-stop government services, which enable access to government services through a single website to make it easier for people to get their issues resolved with zero cost and in half a day,” according to Liu Hongmei, director of the city’s administrative examination and approval bureau.

Liu added that Ganzhou has also slashed the number of documents required for the approval of newly established or acquired projects.

The ever-improving business environment has attracted a number of leading industrial leaders, such as Geely Technology, Gree Electric Appliances, and electronics manufacturer Foxconn. Official data shows that the number of newly-established enterprises in Ganzhou exceeded 150,000 in 2021, a 42 percent increase year-on-year.

For example, it has completed an action plan consisting of 265 specific measures this year to help optimize the process of administrative examination and approval.

Xie Laifa, Party secretary of Jiujiang, said that the city will continue to create a competitive business environment, and provide a good foundation for the city’s social and economic development.