BEIJING, Aug. 30, 2022 /PRNewswire/ — The third episode of season two of the China Daily series Youth Power, titled  “Taiwan: The question that’s not really a question”, was broadcast online on Aug 30.

With Mid-Autumn Festival approaching, Youth Power invited Gen Zers to Quanzhou, a region of the mainland closest to Taiwan province, for a reunion trip for young from both sides of the Straits, together with Gen Zers from the United States and Hong Kong Special Administrative Region. 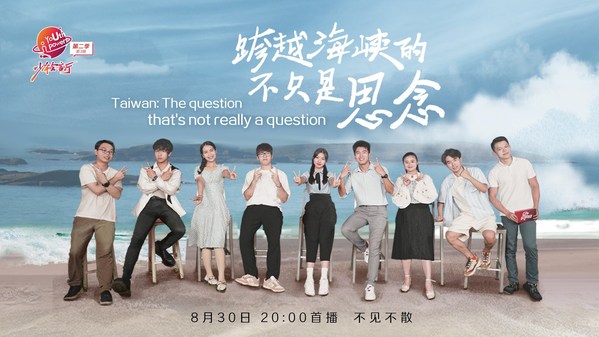 In this episode of Youth Power Gen Z guests dug into the core of the Taiwan question and talked of their hopes for better cross-Straits relations.

The Gen Zers, from both the mainland and Taiwan, talked about various aspects of relations, identifying areas where they have many things in common.

They discussed phrases in their own dialects – those of Guangdong, Sichuan, Nanchang, southern Fujian and Taiwan – which produced many light moments and a greater appreciation of the things they have in common.

“Both sides of the Taiwan Straits use the same language, which demonstrates our deep commonalities,” said Chen Simo, a student at Taiwan at Shanghai International Studies University.

“We’re both sons and daughters of China and descendants of the Yellow Emperor, and we know that a few drops of water can never separate us. The past, the present and the future have given us a common, glorious destiny, one in which we play our role in making our country a proud member in the concert of nations.”

Gen Zers expressed their desire for those on both sides of the Straits to see each other for what they are: members of the same family.

Talking of how the Taiwan Democratic Progressive Party has pushed de-sinicization and the idea of “independence” in education and culture, Zhang Enshuo, a Taiwan resident, cited school textbooks. In recent years, he said, the contents of such books in Taiwan have been altered, understating the connection between the mainland and Taiwan. “It’s regretful.”

Wang Licheng, 17, of Shanghai, said education should not involve fabricating attractive stories, but should be about telling true stories in the correct way, and that involves a lot of responsibility.

“History helps to make us who we are. What matters even more is what we decide to do right now and what we wish ourselves to become in the future.” Zhong Yutong, the host of Youth Power, suggested that learning from history is not limited to Chinese wherever they may be, but to all people everywhere.

Dylan Austin Walker, 25, a member of the Communist Party USA (CPUSA), said: “Many more young Americans are starting to understand the truth about the Taiwan question, openly expressing their opposition to the US government acting as the so-called world’s police.”

He urged Americans to study Chinese history, visit China and experience the country, and do more to improve relations between the two countries.

The Gen Zers from both the mainland and Taiwan said the complete reunification of China is the common aspiration of all Chinese.

“My wish is simple,” said Wang Licheng, 18, a student at Peking University. “Taking a high-speed train all the way to Taiwan. When I get there I really hope it can take me around the place. The scenery is beautiful. I hope that becomes a reality one day.”

Wang Zongnan of Sichuan province, who is studying at Tsinghua University said: “My grandmother, who was born in 1948, always told me she wanted to see the news of reunification with her own eyes. I think that runs through her veins as well as mine. I don’t want Western powers to use a part of China as a political tool and turn it against China. So my wish is that my grandmother’s wish comes true.”

The Taiwan Gen Zers said they hoped that through better understanding, people can build stronger bonds over the Straits. “Let’s put our hands up and agree that together we wish to make the only China a better place,” said Lin Hanting of Taiwan, a second-year student at Dalian University of Technology. “That’s all I want.”

Zheng Yaling of Taiwan, who is studying at Hunan University, said she was grateful for the time she had spent in the mainland.

“We come from the same root and we’re going to build the Chinese dream together, because that way we are stronger.”

She pledged to promote cross-Straits cultural exchanges and to try to eliminate misunderstandings.

Youth Power, organized by China Daily and first broadcast in June last year, aims to build a global platform for communication and exchange focusing on the interests and ideas of Generation Z.The program comes in the form of interviews, forums and speeches, with topics related to anything of current interest in the world.

Kuaishou secures ISO27001 and ISO27701 certification for privacy and security

Hong Kong Palace Museum: Narrating the charm of the Orient