HONG KONG, June 22, 2022 /PRNewswire/ — This month on ‘Mission: Ahead’, CNN Innovation and Space correspondent Rachel Crane meets inventors and entrepreneurs from across the globe who are rethinking the way we move and travel. The special 30-minute episode explores how new technology is changing human mobility, helping us go further – without the carbon footprint. 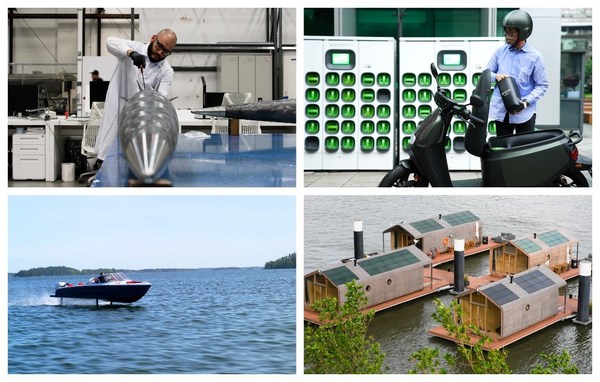 Ships are notorious for their carbon emissions. On a mission to popularize greener boating is Gustav Hasselskog, founder and CEO of Candela, a Stockholm-based start-up hoping to speed up the electric vehicle revolution on the seas. Hasselskog designed a boat with a pair of computer-controlled hydrofoils which function as wings, lifting the boat out of the water. By gliding over the waves instead of pushing through them, Candela’s boats use less energy so they can go faster and for longer on a smaller battery. According to the company, its electric engine releases no emissions and no noise. In addition to recreational boats, Hasselskog is now developing city ferries too.

Air pollution affects cities across the globe. Part of the problem comes from the way people get around. In Asia, many use two wheelers, which produce more smog-forming emissions than cars, experts say. Horace Luke, an entrepreneur based in Taiwan, has an alternative – one he hopes will make city streets a lot greener. His company Gogoro has developed a range of electric smart scooters with swappable batteries – an idea that has taken Taiwan by storm. Gogoro is also expanding into larger scooter markets like China and India.

Rising sea levels are posing a threat to coastal cities around the world. A growing number of architects are planning for this future by developing communities that can – quite literally – go with the tide. Dutch architect Koen Olthuis founded Waterstudio, a firm dedicated to building floating structures. The company is now working on its largest-scale project to date: a floating city in the Maldives for twenty thousand people, complete with solar powered schools, shops and a raft of energy saving features. As the global population continues to grow, these kinds of projects could encourage cities to expand sustainably.

Next, on a mission to transform the way we access outer space is Jonathan Yaney, founder and CEO of SpinLaunch. The California-based start-up is working on a launch system that could one day catapult satellites and spacecraft out of the Earth’s atmosphere. Once out of the atmosphere, a rocket engine would kick in to carry the craft to its final destination. The system will use 70% less fuel and materials than conventional rockets, making it a greener way to get objects into space – and up to ten times cheaper, SpinLaunch says.

Finally, CNN hears from Hugh Herr, a professor on a mission to help people overcome physical disabilities. Frustrated by the rudimentary prosthetics he was given after losing his legs in an accident, Herr set out to improve their design. Working alongside other scientists at MIT, Herr has helped conceive and develop cutting-edge human bionic devices that are available to patients today. Herr is now working on technology that uses magnets to link an amputee’s brain and muscles to their bionic limb, so the prosthesis can move even more naturally.

CNN’s portfolio of news and information services is available in seven different languages across all major TV, digital and mobile platforms, reaching more than 475 million households around the globe. CNN International is the number one international TV news channel according to all major media surveys across Europe, the Middle East and Africa, the Asia Pacific region, and Latin America and has a US presence that includes CNNgo. CNN Digital is a leading network for online news, mobile news and social media. CNN is at the forefront of digital innovation and continues to invest heavily in expanding its digital global footprint, with a suite of award-winning digital properties and a range of strategic content partnerships, commercialised through a strong data-driven understanding of audience behaviours. CNN has won multiple prestigious awards around the world for its journalism. Around 1,000 hours of long-form series, documentaries and specials are produced every year by CNNI’s non-news programming division. CNN has 36 editorial offices and more than 1,100 affiliates worldwide through CNN Newsource. CNN International is a Warner Bros. Discovery company.