HONG KONG, Sept. 7, 2022 /PRNewswire/ — In the season three premiere of ‘Inventing Tomorrow’, CNN International correspondent Blake Essig learns how companies around the world are inventing new ways to tackle the world’s growing climate challenges. On this special 30-minute episode, Essig meets the pioneers around the globe who are embracing design to create buildings and vehicles for a better tomorrow. 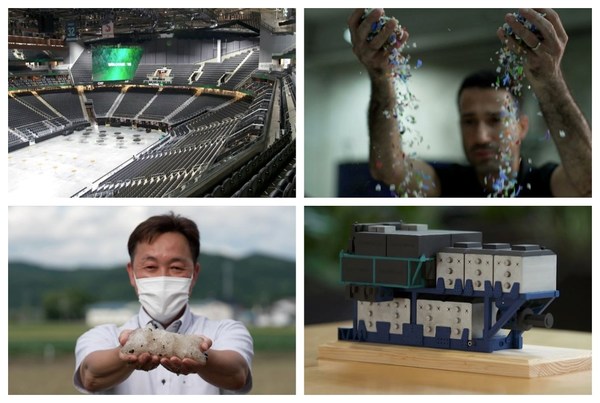 Data centers around the world require large amounts of energy to stay cool. In the city of Bibai, Japan, one company has turned to the winter season for an alternative solution. The White Data Center spent six years designing a system that uses snow cleared from the streets to produce air conditioning to cool server racks. The Data Center is now also a commercial enterprise, hoping to offer clients low energy costs without using fossil fuels, and has partnered with city officials to collect all the snow ploughed from the streets of Bibai in coming winters. Essig hears from Kota Honma, director of the Center, who explains that reducing emissions is only one piece of the puzzle. The Center is also designed to simultaneously capture heat from the servers to heat an adjacent greenhouse used to grow mushrooms – a welcome feature for the city’s vibrant farming community.

Next, a Hong Kong-based startup called EcoBricks is reducing carbon emissions created by the production of construction materials by developing a brick made from upcycling seven types of plastic waste. The design diverts and makes use of plastic that would otherwise have been destined for the city’s landfills. Now, the bricks are pulling double duty, being utilized across the city’s landscape while simultaneously eliminating waste.

There’s a growing movement within the architecture industry to find ways to make buildings more sustainable. The programme takes viewers inside the Climate Pledge Arena in Seattle, Washington, which is aiming to become the first certified net-zero carbon arena in the world. Originally built for the Seattle World’s Fair in 1962, the arena underwent a massive transformation that began in 2018. The building now runs on renewable energy, and has purposely preserved elements of its original structure to make it more sustainable. For example, the arena retained its 44-million-pound historical roof – which is also used to capture rainwater to create the arena’s ice rink.

Finally, as of 2020, between four and seven percent of the world’s greenhouse gas emissions can be traced to the mining industry. Spurred by this problem, engineering startup First Mode created the world’s largest mobile hydrogen power plant as part of an effort to replace the diesel used by mining trucks. The company has also partnered with Anglo American in South Africa, one of the world’s largest mining companies, to retrofit the company’s entire fleet of trucks.

CNN’s portfolio of news and information services is available in seven different languages across all major TV, digital and mobile platforms, reaching more than 475 million households around the globe. CNN International is the number one international TV news channel according to all major media surveys across Europe, the Middle East and Africa, the Asia Pacific region, and Latin America and has a US presence that includes CNNgo. CNN Digital is a leading network for online news, mobile news and social media. CNN is at the forefront of digital innovation and continues to invest heavily in expanding its digital global footprint, with a suite of award-winning digital properties and a range of strategic content partnerships, commercialised through a strong data-driven understanding of audience behaviours. CNN has won multiple prestigious awards around the world for its journalism. Around 1,000 hours of long-form series, documentaries and specials are produced every year by CNNI’s non-news programming division. CNN has 36 editorial offices and more than 1,100 affiliates worldwide through CNN Newsource. CNN International is a Warner Bros. Discovery company.