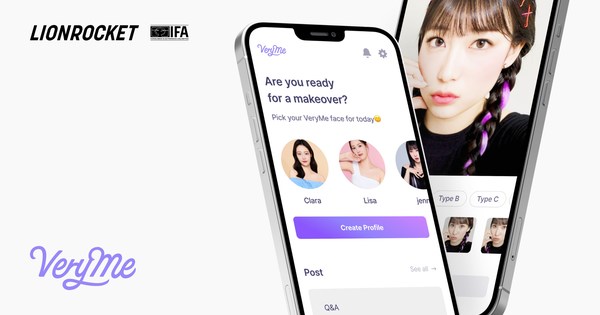 VeryMe, developed using LionRocket’s AI technology, is an app that allows the user to create and use their own unique virtual face based on their real face. It is the first such app in the industry. The name “VeryMe” signifies LionRocket’s vision of a world where anyone can freely express their own unique selves.

With VeryMe, anyone can become a creator by creating a virtual face that looks different from their own in just a few seconds. First, you open the VeryMe app and take a picture of your face, after which various versions of your virtual face are created by combining your photo with the AI face data on the VeryMe server. From a selection of candidates, you can choose your virtual face and create a profile. After, when you upload photos or videos that contain your face in the app, your face in those photos or videos will be automatically converted into the new virtual face that you selected.

Unlike typical apps, which simply combine your face with someone else’s, VeryMe implements a face-forming function that converts the user’s face into one-of-a-kind virtual face. This is the first time that such a function has been applied to a virtual face app, making it particularly noteworthy.

The photos and videos you create with VeryMe can be saved in any file format and used on your social media accounts, including YouTube, Instagram, and TikTok. People who have been reluctant to use social media because they did not wish to show their real face and people who just want to try something new with a new face can freely engage in creative activities using their virtual character.

In principle, VeryMe allows only the user to take a picture of their own face and upload it. The unauthorized use of other people’s facial information is prohibited, and LionRocket aims to improve its inspection engine, such as by introducing personal device or email authentication procedures, to make sure that the service is safe and secure. Detailed information on VeryMe’s Code of Ethics can be found on the VeryMe website.

In addition, at IFA, users can experience virtual human content creation through the AI-based content production platform “OnAirStudio.” It is also possible to produce videos in which LionRocket’s own foreign AI virtual model speaks in a very natural way.

LionRocket CEO Jeong Seung-hwan remarked, “We will provide a completely new experience and level of entertainment through VeryMe, which will be showcased to the world and the many industry players attending IFA 2022.” He added, “We will continue strengthening our influence in the global market and striving to provide new experiences and greater enjoyment to the AI media market.”

Meanwhile, IFA’s “IFA NEXT,” in which LionRocket will be participating, is a place for global innovative companies to share their products and ideas. With the goal of popularizing AI, LionRocket plans to introduce to the public AI technologies and services that it is currently developing and operating, providing new experiences and enjoyment.

The Born2Global Centre, operated by Born2Global, is a full-cycle service platform that supports the global expansion of promising companies. Established in 2013 under the Ministry of Science and ICT, Born2Global has been setting the standards for a successful startup ecosystem in Korea and continues to expand and transform startups so that they are engaged, well equipped, and connected with the global market.

Huawei Mobile Services’ Apps UP 2022 Returns to Asia Pacific with a Total of US$200,000 Cash Prizes to be Won

Kuaishou secures ISO27001 and ISO27701 certification for privacy and security