BEIJING, Sept. 30, 2022 /PRNewswire/ — 2022 marks the 30th anniversary of the establishment of diplomatic relations between China and the Republic of Korea, and this year has been designated the year of the China-South Korea Year of Cultural Exchanges. 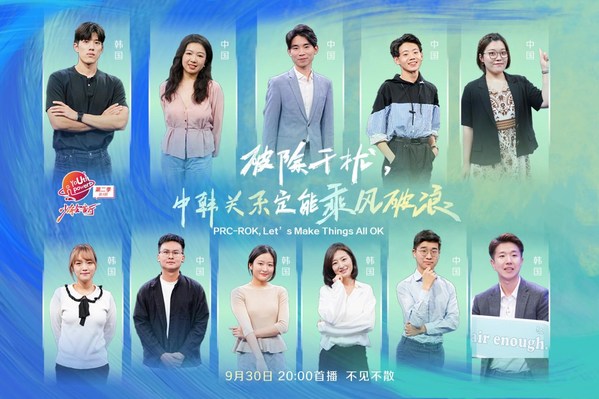 poster of the episode

The fourth episode of season two of the China Daily Series Youth Power, organized by China Daily Gen Z studio, was broadcast on September 30. For this episode of Youth Power Gen Zers of both China and South Korea were invited to discuss topics related to culture, society, economics and politics. They engaged in candid dialogue related to China-ROK relations in the past, present and future.

Youth Power also conducted an online survey and several street interviews regarding the views of Gen Zers on relations between the two countries via a questionnaire of more than 100 Gen Z youth in both China and South Korea. More than half of the Gen Zers in both countries said they believed that there were more similarities between Chinese and South Korean youngsters than there were differences. Two-thirds of Chinese youth had favorable impressions of South Korea, and 70 percent of South Koreans had more favorable feelings toward China. More than three-fourths of young Chinese and South Koreans said they believed China-South Korea relations would improve in the future.

Asian countries are physically and culturally close, with similar historical experiences and the same dream and pursuits. Gen Zers in China and South Korea knew that China and the Republic of Korea had been neighbors and shared a long history and cultural traditions, including similarities with language and festivals. Clea Jin, a Gen Zer from South Korea who has just graduated from Peking University, said “the two countries have so many traditions and cultures in common because we’ve been through a lot together. “

Zhao Jingyi, a Chinese student at Shanghai International Studies University, talked of her understanding of the historical relationship between the two countries. “The cultural similarity between China and South Korea is inseparable from their long history of communication as evidenced by Jizi, a nobleman of the Yin Dynasty (c.16th century-11th century BC) who traveled to Korea and taught the technology of silkworm breeding and cloth weaving, and Choe Chi-won, the ‘Confucian of the East’ who went to China in the Tang Dynasty (618-907) to study Sinology and became an official.”

“Traditional Chinese culture did not only develop itself but also been developing or cultivating into other forms of culture,” said Yang Jinhe, a Chinese student at Beijing Foreign Studies University.

Kim Junbum, a South Korean who started his own company in China, talked of his favorite Chinese idiom, “Hai na bai chuan” (all rivers run into the sea). The phrase embodies the spirit of tolerance of the Chinese people and shows the generosity of Chinese culture, he said.

The host, Wang Zongnan, of Tsinghua University, said that seeking common ground while reserving differences is the best interpretation for future relations between China and South Korea. “That’s why we inherit and should carry forward the spirit of cooperation just like our ancestors and lead it to the future.”

However, often in close relationships, differences of opinion can arise, and in recent years China-ROK relations have gone through some rough patches. The program’s guests said some media reports and film and television works were full of stereotypes that could mislead people of the two countries about each other. So Gen Zers should bravely take the initiative to contribute to the long-term development of the two countries and the world, they said.

One of the program guests suggested using the media to influence the press, thus eliminating prejudices and reaching a consensus, was one solution. Kim Junbum showed his experience promoting cultural exchanges, talked of his business ventures in China, posting vlogs on overseas social media. He believed this was a tangible way of helping more people understand the real China.

At the end of the episode, Gen Zers of China and South Korea also expressed best wishes for the future of the two countries.

Lim Sojung, a South Korean student who studied in China for 15 years, said that although China-South Korea relations had been affected by many factors in recent years, “the two countries can overcome those influences and work together to move forward in a new digital era. Therefore, I think that Korea-China relations will develop significantly in the future and I hope Korea and China can become eternal neighbors and partners”.

Liu Zipei, a Chinese student at Beijing Foreign Studies University, said: “If I had a friend who had a 30-year bond with me, I would definitely, with no hesitation, give him or her my sincerity. Long live our friendship.”

Youth Power, organized by China Daily and first broadcast in June last year, aims to build a global platform for communication and exchange focusing on the interests and ideas of Generation Z.The program comes in the form of interviews, forums and speeches, with topics related to anything of current interest in the world.